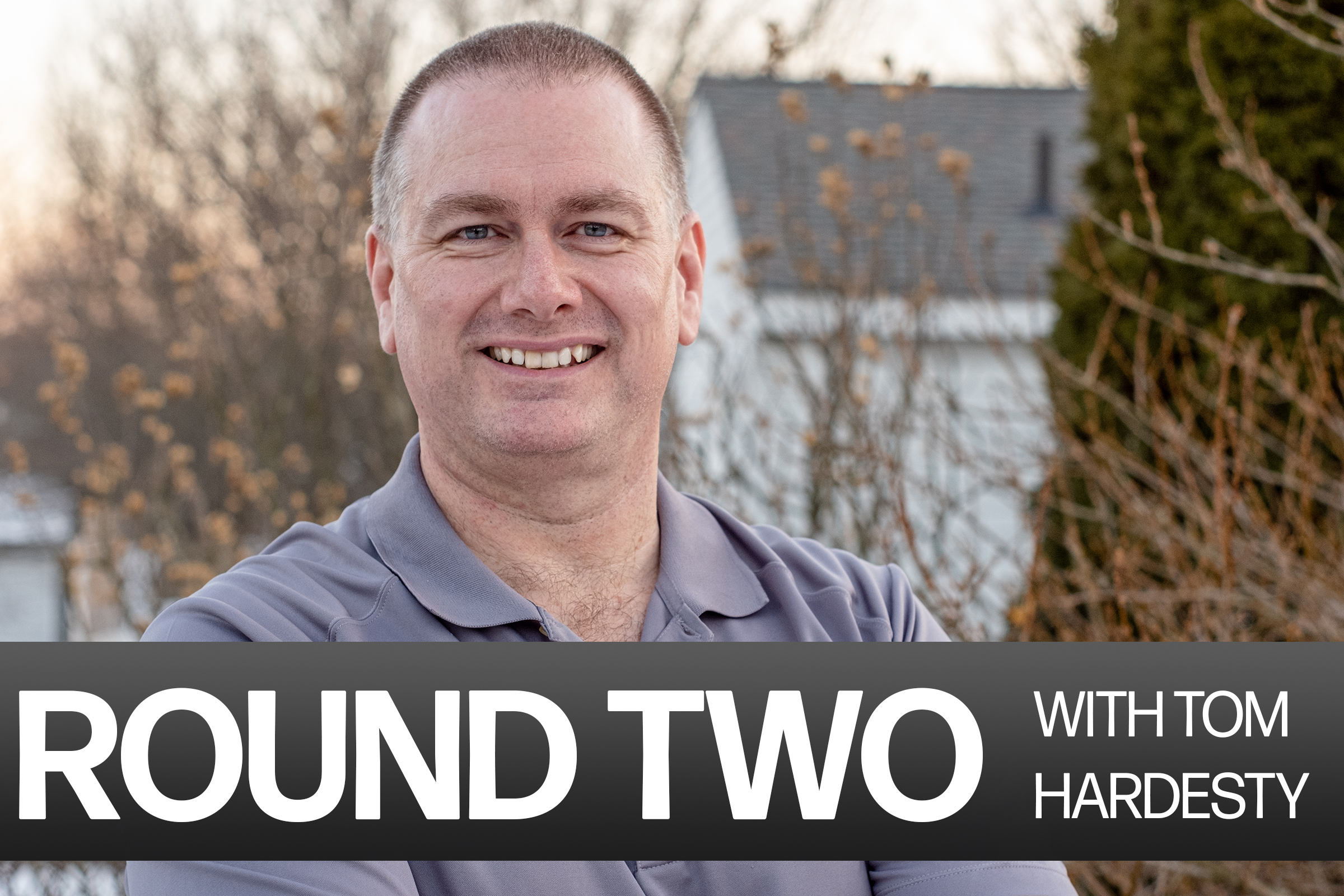 Back for Round Two

I never got to say goodbye.

From the moment I was informed in late June 2017 that my job as Assistant Sports Editor at the Record-Courier no longer existed, the one thing that gnawed at me most in the nearly four years since that day is the fact that I didn’t get to thank the readers for their loyalty and support and tell them farewell.

Instead, I cleaned out my desk, walked out the front door of the R-C office on West Main Street in Kent, and walked into a new chapter of my life. Twenty-three years with the newspaper, 12 as Assistant Sports Editor, gone in an instant.

It wasn’t quite how I had envisioned my departure from a place that I had devoted nearly half my life to, usually working into the wee hours of the morning every night to help ensure that the good people of Portage County had a quality sports section the next day.

Now, almost four years on, I am (finally) back writing sports in the county where I was born, grew up, went to school, played sports and worked for so long. As sports columnist for The Portager, I’m excited to get another chance to help tell the tale of the schools, coaches and athletes that have made this county so special.

While at the R-C, I had the honor and privilege of personally covering such athletes as Bridget Franek and Chuck Crowder of Crestwood, Kim Kreiner and Chuck Moore of Mogadore, Marcus Sanders of Ravenna, Ernie Cobbin of Kent Roosevelt, Mike White and J.R. Steinel of Waterloo, Emily Mars of Field, Barron Chambers of Garfield, Julie McDivitt of Windham, Neal Bailey of Southeast, Beth Bauer of Rootstown and the Streetsboro wrestling team that won the 1997 state championship. To name just a very, very few.

While this weekly column will evolve over time, I hope to keep it fresh and relevant through the diversity of its content and format. It will feature opinion, topical content, historical perspective, interesting tidbits and general musings on all things Portage County sports. And sometimes more, should the situation call for it.

And I’m especially excited to get in on essentially the ground floor of what The Portager editor and publisher Ben Wolford is building: a community-centric news outlet dedicated to providing the people of Portage County information that is relevant to them.

Many thanks to Ben — a former co-worker of mine at the R-C — for giving me this opportunity to get back in the game.

So how did I arrive at this point? In the words of Paul McCartney, it’s been a long and winding road.

I had naively assumed I would get to leave the Record-Courier at a time of my choosing, when the moment felt right, and say a proper goodbye to all those who had made my journalism career so enjoyable and rewarding. But then, fairy tale endings too often seem to be the exception, not the norm, in the American business model. Workers become numbers sacrificed like pawns on a chess board, tossed aside so the kings and queens behind them can continue their rule.

For more than two decades, my job was to monitor high school sports in Portage County. I lived it, breathed it, slept it. I built close working relationships with coaches, athletes and administrators; I nurtured friendships with many of them, including fans, parents and people throughout the communities who just wanted to email back and forth talking sports. I looked forward to hearing from them, talking to them, seeing them when I was out and about. And then it was over.

I went from sweating out nightly deadlines sitting at my desk in the R-C to sweating out finding a job sitting in front of the laptop in our house. Initially, my thinking went like this: With a degree in Mass Communications and 30 years of experience in sports journalism, how hard could it be? Turns out, next to impossible.

With traditional newspapers in their death throes, my options were limited. I did land a part-time job as a sports reporter covering the Medina County area in fall 2017, but that led to another realization: What newspaper jobs were still available didn’t exactly pay a king’s ransom. Long hours, long road trips and low pay wasn’t cutting it.

So I moved on — not just from that gig, but from sports journalism entirely. However, I had no idea what was next. Or what the possibilities for “next” even were. I sent out well over 100 resumes, waded through a sea of online applications and their accompanying, never-ending questionnaires, anxiously waited to hear back from jobs that I knew full well I was infinitely qualified for, and … crickets.

Nothing. I did get a couple marketing nibbles, but the jobs looked so excruciatingly boring that I was actually thrilled not to hear back a second time.

As my frustration mounted and I seriously began to think I was going to be an early retiree whether I liked it or not, my wife asked me one day: “What else do you really want to do? What would you enjoy doing?”

I had devoted most of my life to sports, either playing them, following them or reporting on them. Sports had largely defined my very existence since birth. What else did I want to do? Tough question, since I had never once considered it.

So, forced to consider it, I looked around our house and saw four cats and a dog. The answer was literally sitting right under my nose. Animals. I wanted to take care of animals.

Of course, I had no formal schooling or professional experience in the animal care arena. I had to go get it — the hard way. After two years of job hunting — that’s right, two years, which included working a couple months as a part-time janitor at a large warehouse where, among other duties, I had to clean locker rooms and scrub toilets — I landed a job working at an area kennel.

Many times, as I scrubbed filthy dog kennels and cleaned “potty yards” and tried to avoid getting mauled by Rottweilers and German Shepherds, I wondered how it could be possible that I went from a cushy desk job sitting in front of a computer to wrangling snarling, drooling dogs who were not at all happy to be locked up like prisoners.

After a while, though, it occurred to me: The jobs are not all that dissimilar. With both, I’m giving back to the community, except I’m doing it in much different ways. And my latest venture for most of the past year has been working the overnight shift at a local animal hospital, which has been a real eye-opener in a lot of ways. Taking care of sick, sometimes very sick, dogs and cats throughout the night — a shift where I am the only person in the building from midnight to 7 a.m. — is a place in life I never thought I would be.

But I’m there. And I’m there caring for others’ beloved pets, administering medications and performing other treatments throughout the night to assist in their recovery or, in some cases, keep them alive, because a door in my life unexpectedly slammed shut. And when it did, another one popped open, allowing me to pursue this second career in animal care.

I have also kept my foot in the publishing door working as a proofreader/copy editor for a local company that produces travel guides, covering everywhere from Florida to California to the Aleutian Islands at the western tip of Alaska. It has helped to keep my journalism skills sharp and has also served as an extraordinarily interesting education in geography.

And in between all of that, I authored my first book, titled Glimpses of Heaven: Dream Visitations from the Afterlife — and a Visit to Eternity (iUniverse 2019), a non-fiction book that took me more than a year to write. I had always wanted to write a book but never had the time to actually sit down and do it. With the R-C no longer requiring my services, I suddenly had all the time I needed.

And now, the journey comes full circle. I am picking up where I left off that evening in late June 2017: preparing to once again give my best effort for the people of Portage County. It’s been a long and winding road, but I’m back home.

So I didn’t have to say goodbye after all.

Get Portager Sports delivered to your inbox every week. Choose a monthly or annual subscription.

$5/month
$50/year
Portager Sports is a separate newsletter from The Portager's regular local news emails. To get local news delivered to your inbox three days a week, sign up here.
The Portager